In Newfoundland, summer is whale season.

Right now, humpbacks are showing up everywhere and they’re easily spotted from cliffside viewpoints and hiking trails around St. John’s: 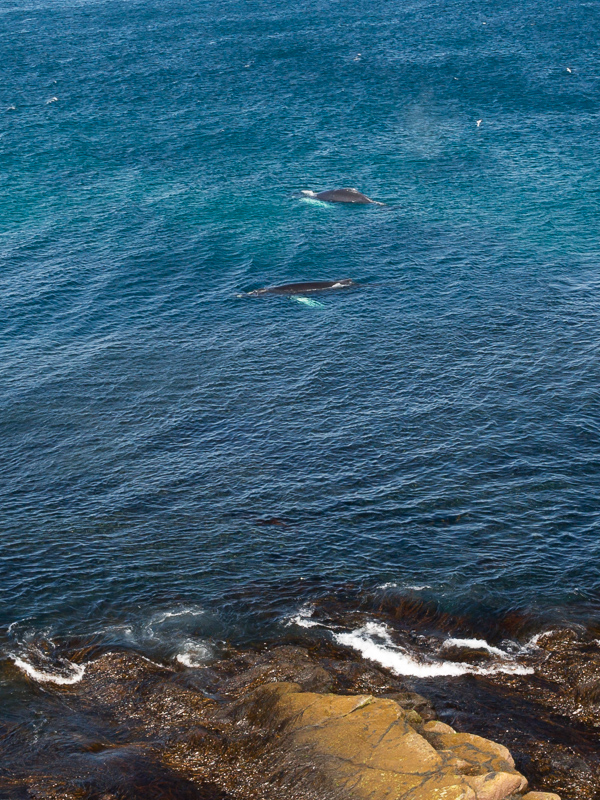 When hungry humpbacks arrive in St. John’s Bay, they like to go back and forth between Cuckolds Cove and Cape Spear, in hot pursuit of tasty capelin that are pushed up against a cliff or corralled into a cove: 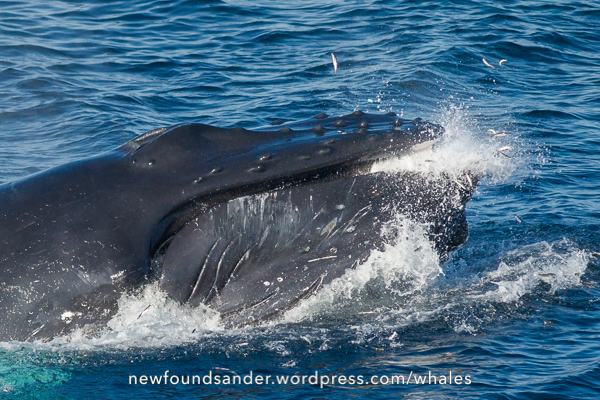 These photos are from my visit to Cape Spear last summer, when the capelin were chased so close to shore I was able to get these shots from the main viewpoint!

If you’ve spotted a whale putting on a performance, why not spread the joy and share your sighting on the Whales in Newfoundland page.

Because of travel restrictions, many people are staying in Newfoundland this year, so why not make the most of it: these whales are happy to entertain. 🙂

Last year Marije and I spent our summer vacation in Newfoundland, starting our trip with few days of sightseeing on the Baie Verte Peninsula, an area we hadn’t visited before.

While we were kind of expecting to see whales and capelin, we were delighted to see bears and moose and caribou as well, there were even a few icebergs still around: 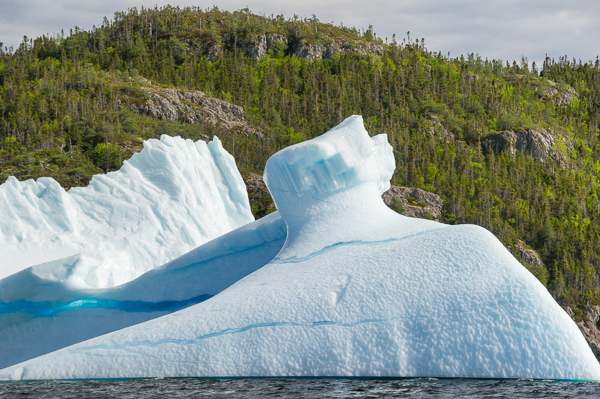 Our base of exploration was La Scie, where we arrived after our iceberg watching trip, just in time for sunset:

Sunset on the cliffs – La Scie

Sunset on the cliffs – La Scie

The next day, on our first full day on the Peninsula, we drove around to see all the different little towns and harbours, stopping often when we spotted something by the side of the road:

This bear walked away before I could get my camera from the backseat, but still it was fun seeing it forage among the fresh greens.

This old house is nestled on the cliffs in Shoe Cove, not far from La Scie.

This is the Ocean View Trail in Fleur de Lys, we were hoping to see whales or icebergs here too but if they were out there at all we couldn’t see them through the fog. Still, a lovely area for a walk.

On day 3, the fog was still around, and so was the rain, so we explored a few walking trails close to our motel in La Scie: 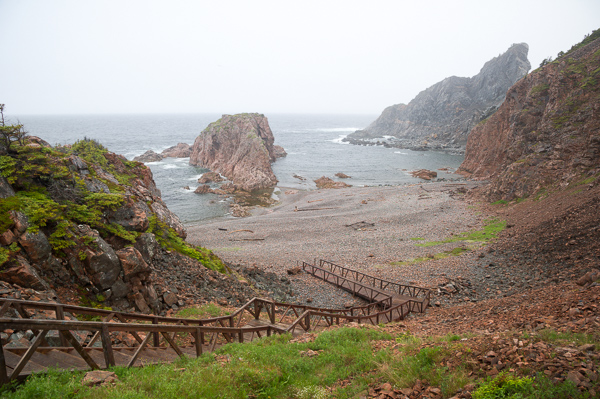 Steps to the beach – La Scie

At the beach, gulls were circling above, and I found capelin eggs in patches here and there, they had clearly spawned there earlier that day…

Caplin Cove Trail was very pretty in the fog: 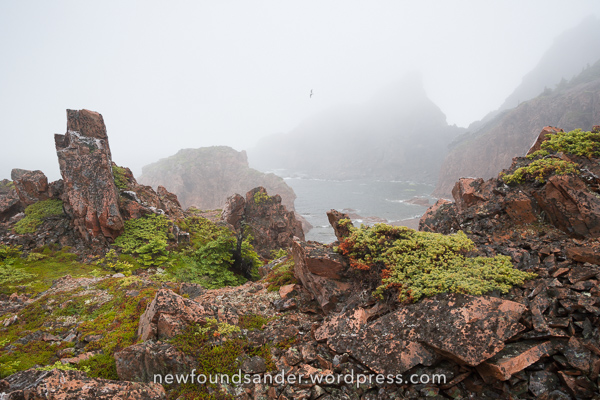 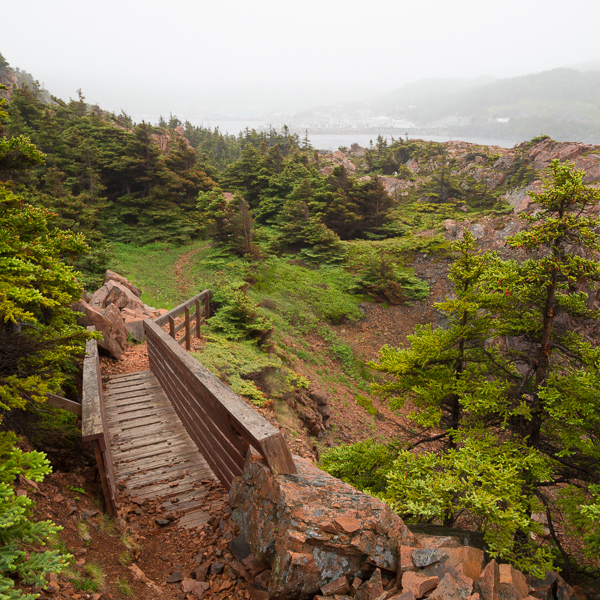 As you can see this kind of weather really brings out the colour on the rocks and trees, and even though we got wet, we still had a great time 🙂

With an abundance of space and fresh air, the East Coast Trail is a great place to get away from it all, now more so than ever.

Get it on Apple Books

Read more about the East Coast Trail Guide or head over to Apple Books to get the first chapter for free. 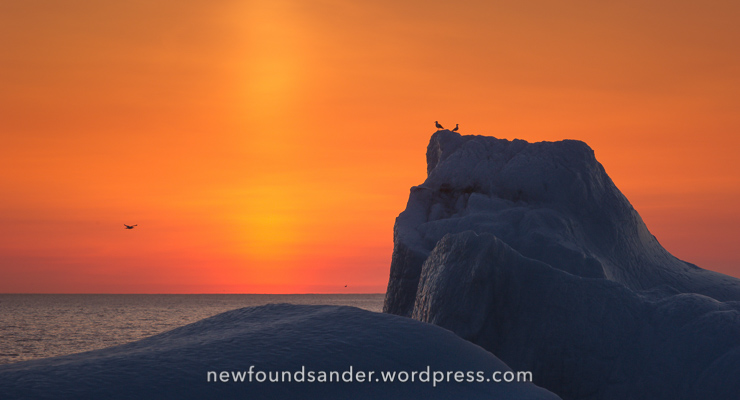 A full month of bad news and bad weather has passed since my last look at the 2020 ice season, but yesterday’s sky was clear enough for another beautiful satellite picture: 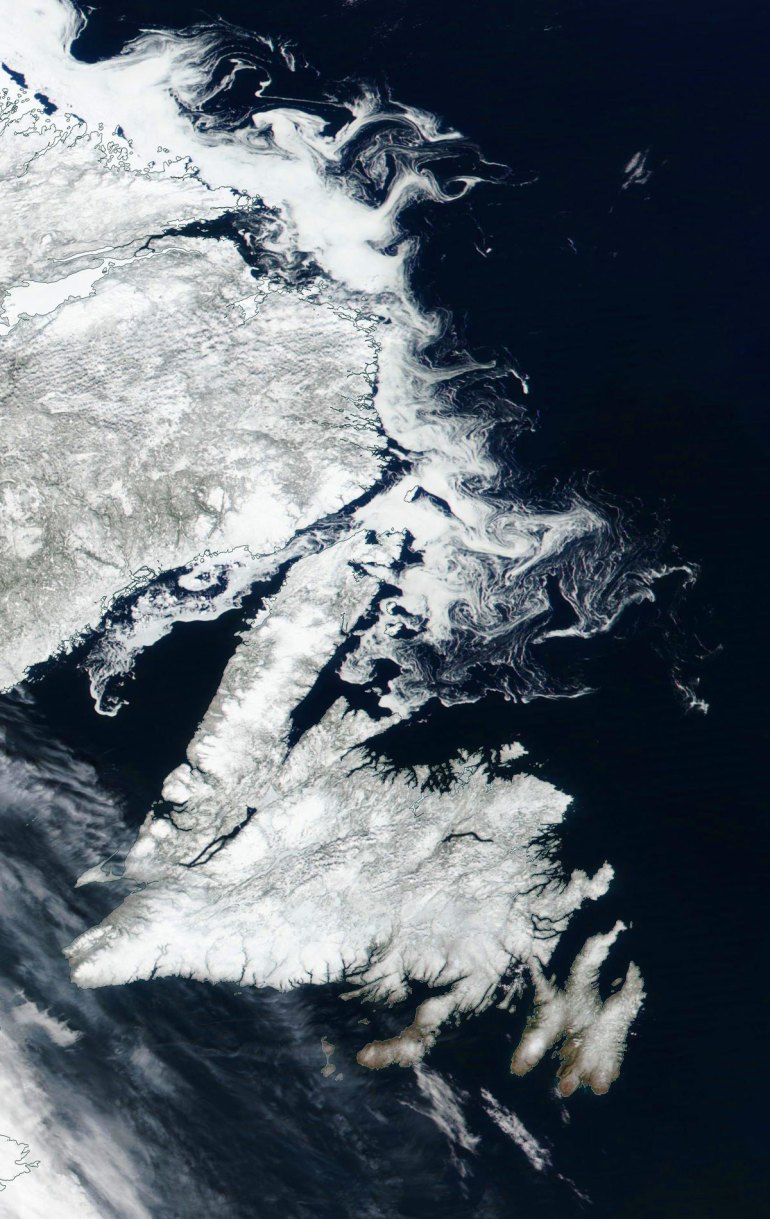 As you can see, the sea ice has all but gone from Central Newfoundland, it’s now only bountiful around the tip of the Great Northern Peninsula.

Have a look at last month’s situation to see the difference.

For years I’ve been keeping track of Newfoundland’s ice seasons to get myself and others excited for the new iceberg season. This year I was hoping to hike the East Coast Trail again if the iceberg season looked promising.

But now, in the face of the COVID-19 pandemic, I’m not going anywhere. I’m staying home on Prince Edward Island.

If you live in Newfoundland and you’re excited about the arrival of the icebergs, that’s great, but don’t drive around the island to go and see them, wait for them to come to you.

For the time being, please just stay at home as much as possible and enjoy what your own community has to offer. When the snow melts in a few weeks and you do go out on a trail near you, listen to public health advisories and keep a healthy distance from each other. 🙂

It’s been 3 weeks since my first look at Newfoundland’s advancing sea ice, and because today was another clear sunny day we’re able to have another look from above:

You can see how the ice has moved further along Iceberg Alley, much like a river of ice flowing down the coast. Three weeks ago the ice hadn’t quite reached LaScie and Twillingate, now it has and more, with some fingers of ice grasping at the shores of the Bonavista and Avalon Peninsulas:

As far as icebergs are concerned, today’s chart shows their numbers are increasing, with a few present near the Avalon already, but note in the lower-right corner that these numbers are based on a reconnaissance flight from a few days ago:

Wouldn’t it be amazing to be on a plane like that, flying over the ice and charting the location of all these icebergs coming down the line? Sign me up!

We’re getting close to the end of February so let’s have a look at Newfoundland’s advancing sea ice. In the coming months I’ll keep an eye on it just like I do every sea ice and iceberg season.

Wow. Look at all that sea ice! Nearly all of Iceberg Alley is visible on satellite today thanks to ‘fair’ weather from the Torngat Mountains in Labrador to Signal Hill in downtown St. John’s.

Let’s have a closer look at Newfoundland for a minute: 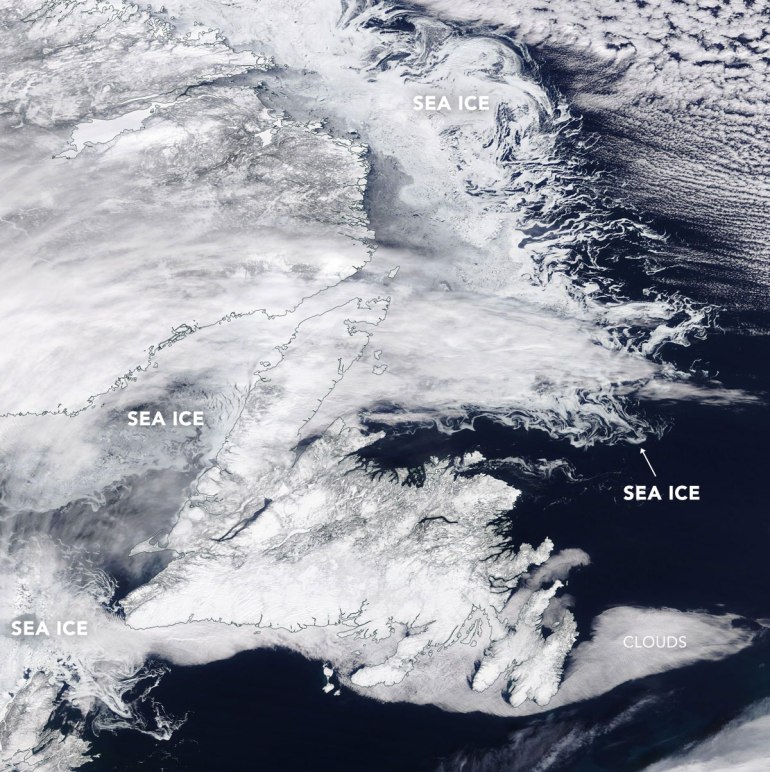 As you can see the ice has already made it around both sides of the Great Northern Peninsula, flowing into the Gulf of St. Lawrence on the left but not quite making it all the way to La Scie and Twillingate on the right just yet.

The grid numbers are still low but keep in mind it’s only February, in a few more weeks we’ll know much more about the upcoming season. 🙂

If at all possible, I will visit Newfoundland again this year, though I’m not sure of it will be spring, summer, or fall. Here’s hoping!